Kids grow up and get jobs; babies arrive, couples form and split, but Kast family week on Martha’s Vineyard brought a remnant together again this year for an action-packed week of surf swimming on South Beach and Aquinnah, kayaking on Sengekontacket Pond, paddle ball on Vineyard Sound, shopping at farmer’s markets and farms, and always cooking and more cooking.

The children, grandchildren and great grandchildren of Eric Kast now range in age from four months (Avi and Arisha) to 75 (me). They live in San Francisco, Chicago, New Jersey, Vermont and Omsk, Russia. Eight of them (including partners) made it to the Vineyard, and I visited Ari, Eun and baby Avi on the way home.

But names and places can’t express my delight on arriving, after a full day flight delay, to find that Erica had moved in, organized shopping and met Anton and Lola, who had flown in from San Francisco. After that the week was a whirlwind, as Erica and Phil did the hilly “Run the Chop,” a five-mile course, and lived to eat lobster rolls from Net Result, 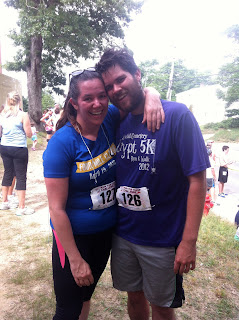 Erica & Phil after Run the Chop

while Lola discovered the joys of chasing (and being chased by) ocean waves; Phil grilled chickens and made greens, bacon and eggs for breakfast, and conversations moved quickly from the mundane to the personal, a year of living compressed into seven days. Richard, the second oldest, physician and cancer research, commissioned Lola to find six equal-sized stones, the result the mobile in the video above. And it’s not the Vineyard without a ride on the Flying Horses. Erica captured Anton, Lola and me with that nostalgic music in the video below.  Richard and Kim’s daughter Emma arrived fresh from a summer in Brazil, just in time for a rough surf swim on South Beach. 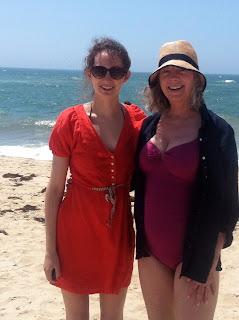 Exhausted by a wonderful week, I rode two ferries and three buses, drowsing all the way, to the lobster-fishing island of Vinalhaven off the rocky coast of Maine. There I joined old friend, Carter Frank, and new one, Priscilla Moody, for a restful week of writing, hiking in wooded preserves, and swimming in a granite quarry. Carter led us in Tai Chi on the porch, where we focused on the gorgeous view. 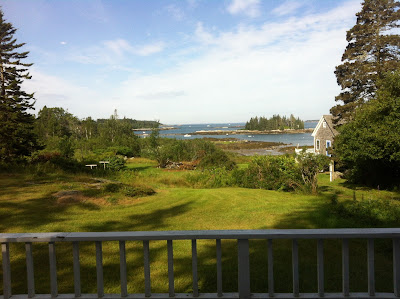 I am the author of The Crack between the Worlds: a dancer's memoir of loss, faith and family, one of Image Update's Ten Best of 2009. My first novel, A Free, Unsullied Land, was published by Fomite Press. I am a Board member of Links Hall, an incubator and presenter of dance and performance art.